Note: This aircraft is of particular interest as it was the only allied aircraft to be lost over the North West of England due directly to enemy action. The night in question saw the last major attack on Liverpool, which had been part an ongoing assault on the city. During the raid there were estimated to be some one hundred and sixty six aircraft over the Liverpool area and some two hundred and thirty two tons of high explosive and eight hundred and seven incendiary canisters were dropped. There would only be another seven raids on Liverpool for the remainder of the war and most of them ineffective.

Boulton Paul Defiant I, No N3500, coded JT-B, took of from its base at Squires Gate near Blackpool on the 8th May 1941 at 00.20 hours to carry out a night fighter sortie in the Liverpool area, the aircraft was piloted by Squadron Leader G. H. Gatheral the Squadron Commanding Officer and his air gunner was Flying Officer D. S. Wallen. 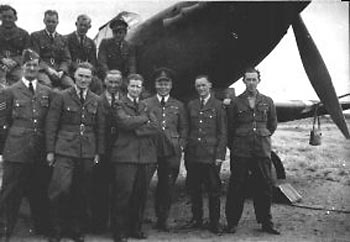 256 Squadron members at Squires Gate in Spring 1941, S/L Gatheral is on the front row in the peaked hat, F/O Wallen is not on this photograph.

After flying for about fifty minutes at approximately 01.10 a Junkers Ju88 was sighted on their port quarter flying on a converging course at 16,000 feet over the St Helens area. They immediately turned starboard and dived slightly at this point the Junkers was about 300 feet above them and 100 yards in front, Flying Officer Wallen kept a bead on him whilst Squadron Leader Gatheral manoeuvred into a more favourable position, at this point the Junkers rear gunner opened fire and Flying Officer Wallen was forced to return fire with a two second burst.

The enemy tracer appeared to pass ahead of the aircraft and Flying Officer's shots hit the Junkers in the fuselage behind the wing root, the Junker's gunner now hit the Defiant's glycol header tank immediately the cockpit was filled with dense white fumes and some glycol went into Squadron Leader Gatheral's eyes who tried to jettison his hood but wrenched the knob off, so he opened it in the normal manner, the turret was also filled with fumes which obliterated all external vision, the clear vision panel was opened but this made no difference.

Flying Officer Wallen decided to give the Junkers one more burst in the direction he thought the aircraft was in, just to show there was still some life left in the Defiant, immediately after this he was given the order to bale out due to the engine losing power and spluttering. He took of his helmet and cocked his leg over the side and sat there for a few seconds trying to locate the tail plane and rudder, then flung himself over the starboard side but unfortunately he still struck the tail plane with his left jaw and immediately pulled the rip cord. At around 5,000 feet he heard many enemy aircraft overhead and witnessed his own aircraft burst into flames, come whistling down in a large curve and crash into the ground in a large fiery mass. Flying Officer Wallen landed near Hough Green station and where he was made comfortable in a local farmhouse and later caught up with Squadron Leader Gatheral in the front room of the local Police station at Cronton were much tea was drunk!

Squadron Leader Gatheral bailed out of the aircraft about three minutes after Flying Officer Wallen, thinking he was at 3,000 after misreading the altimeter and was actually at 13,000 feet, he dived over the left side and noted that the aircraft seemed to stall as he left it. He landed in a cultivated field, then walked about a mile till he came to a farm house and was taken to the police station at Cronton, where he met up with Flying Officer Wallen. Their aircraft crashed in a field alongside Ansdell's Wood at Micklehead Green, St Helens and was completely destroyed.

Later whilst filling his combat report Squadron Leader Gatheral came to the conclusion he should have passed under the Junkers to his starboard quarter before trying to overall him as the aircraft would have not been between the moon and the Junkers due to the fact that Squadron Leader Gatheral did not want to loose sight of the Junkers and to engage it as close as possible. He had also seen another Junkers but was on a reciprocal course, but could not turn quickly enough to catch it.

Many locals witnessed the final moments of drama taking place above their homes:

The day after the crash the site was guarded by Police and RAF personnel and a crater could be seen where the aircraft had impacted and spread wreckage over a two-three hundred yard area, at least one of the crew also visited the site the day after, after the area was cleared a number of the local schools boys descended on the site to look for souvenirs a number of pieces were taken but so far none have been traced.

Flying Officer Denis Stanley Wallen RAFVR was commissioned in on the 4th February 1940 and was made an OBE on 1st January 1946, he left the RAF shortly after that having reached the rank of Wing Comander. Squadron Leader G. H. Gatheral's subsequent career is unknown at this point.

The crash site of N3500 has aroused considerable interest over the years, probably due to the rumoured existence of the engine still lying buried at a depth of twenty feet. Some ten years ago the Wirral based Warplane Wreck Investigation Group conducted a thorough search for the site prior to the St Helens - M62 link road being constructed through the area, but nothing was found. Even during the construction of the road various enthusiasts searched for the site as the ground was being churned up, but again nothing was found.

The site as it is today - taken late February 2001

On the 29th October 2000 a small group of LAIT members decided to give the site one last going over in order to at least try to identify where the aircraft actually came down. Several locations were investigated which corresponded to the various eye witness accounts, though again nothing was found, which came as no real surprise due to the extensive redevelopment work carried out during to the road construction and the extending of a nearby industrial area. Also we discovered that the brook that runs along one side the wood was deepened in the late 1940s and the spoil from this was placed in the wood forming a substantial earth bank several metres high. After a thorough search, we noted that the most promising site at this stage of our investigation - an area of land adjacent to the wood  - had been used to dispose of soil and debris from the road building and landscaping to a depth of 2-3 meters, burying any possible evidence of the crash. Later, after obtaining a number of period aerial photographs, maps etc. and reviewing the eye witness accounts, we came to the conclusion that the aircraft had, in fact,  impacted in a fairly flat trajectory, brushing the tree tops and then breaking up as it impacted, forming only a shallow crater. It would seem likely that the bulk of the aircraft was recovered at the time and any small fragments remaining probably lie under the industrial unit nearest to the road (above), though with the all the construction work in the area, the site may well have been disturbed and parts scattered or more deeply buried, awaiting someone with a keen eye......