At 11.30hrs on 24th May 1944, 2nd Lt John E Austin 0-742929 of the Burtonwood Maintenance Division made a normal take off from Burtonwood in P-38 43-28738 for a local test flight. After flying for about 20 minutes Lt Austin closed down the right engine and feathered the propeller to check its operation and flew on using the left engine only, for about 5 minutes.

At the end of that time Lt Austin un-feathered the propeller and tried to restart the right engine without any success so he re-feathered it and headed for back towards Burtonwood using the left engine. When approximately 5 minutes from Burtonwood the left engine started to misfire very badly and after checking the switches, turning on the left booster pump and working with the mixture control and throttle, the engine caught once or twice then completely stopped.

Lt Austin then locked his shoulder harness, cut the switches and nosed the aircraft down, made a slight turn to the right after passing over a heavy anti aircraft gun battery and bellied the aircraft in, downwind, in a field adjacent to Cherry Tree Lane - going through a hedge (where the damage can be still seen today) and demolishing two post and rail fences the aircraft spun round ninety degrees and came to a halt in the corner of the field only yards from Cherry Tree Cottages and the Manor House.

Lt Austin then went to the nearest telephone and informed the local Police then contacted the Flying Control Officer at Burtonwood, he then went back to the aircraft to await the arrival of the recovery crew. Lt Austin sustained no injuries and in the investigation, it was found that the cause of the action was due to engine failure. The aircraft was a total write-off. 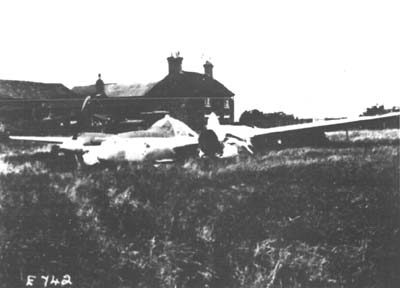 Mr. John Forster recalled the reaction of his Uncle, the farmer who owned the field, Mr. Dick Forster who was going up Cherry Tree Lane towards Moss Bank Road on business - as he came to a wooden post and rail fence he noticed it had been smashed down on his right and as he looked left he saw his crop of oats was flattened for at least 300 yards to the boundary hedge, which was also flattened near to the heavy anti aircraft gun battery.

He was in a hurry to go out, so continued up the Lane past Cherry Tree Farm towards the Manor House, until he noticed a commotion in his top field, where the Home Guard, local Police and a number of civilians stood around an American aircraft (the US authorities had not yet arrived at the scene). As he walked towards the group, he saw Mr. Prior from the Manor House, who was bringing 2nd Lt Austin a cup of tea, but Dick Forster was not in a good mood after having his crops and fences flattened and damaged, so he demanded to know who had landed a plane in his field and how long it would be before it would be removed and the fences repaired -  2nd Lt Austin admitted it was his aircraft. As with many local people at the time, Dick Forster was somewhat jealous of the "Yanks" at Burtonwood and without a thought for the pilot's well being, he said to 2nd Lt Austin "Get it out of there quickly, if it had been an English pilot he wouldn't have crashed it!" 2nd Lt Austin quickly replied "An Englishman couldn't even fly it !". Mr. Forster was now mad and replied, "No Yank could do more than an Englishman, move it as quickly as possible". He then turned and continued on his journey with no more concern.

Cherry Tree Lane was cordoned off and civilians were not permitted to view the scene, leading to local rumours of the aircraft being a German one that had been shot down. Mr John Forster, after arriving home from school on his pony, managed to obtain some pieces of the aircraft to show his friends at school the next day - Sadly these souveniers have been lost during the passage of time. 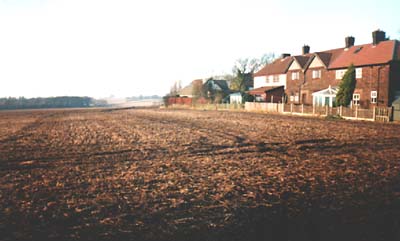 Nothing remains today to mark the site of this wartime drama.

In 1994 when Mr John Forster trying to find out details about the incident, he contacted Mr Prior from the Manor House, who had been in the forces, but home on leave at the time of the crash - he was amazed when he refused to tell him anything about it, as he was "Sworn to secrecy" - even 50 years after the incident!