In January 2001 I received an email from a gentleman living in Clitheroe who had seen the appeal on our website for any information on this crash site and whose wife had found several pieces of the aircraft on Pendle Hill. Following a meeting, I realised that the pieces had come from an area lower down the slope than where I had seen small bits of wreckage some 15 years ago, but unfortunately none of his pieces bore any markings. On a crisp sunny weekend later in January we made another visit to the site, once again fresh evidence of bomb disposal work was evident on the way up, but the area we were heading for was covered in bracken below an obvious bare patch of rock and exposed peat, probably evidence of where oil from the aircraft had contaminated the ground. In this area we found only one small piece of aluminium some two inches across, with no markings. but the lower area indicated by our informant looked impossible to search due to the dense dried bracken. However, close to a path through it we were fortunate to find a more substantial piece bearing several stamped numbers and circular inspection stamps containing an upper case "R" for Republic Aviation.

An appeal on the newsgroup "rec.aviation.restoration" brought a reply from Hans Ploes in Germany who identified the part, from the numbers, as being part of the Engine Cowl Secondary (right hand side) from a P-47 built at Republic's Farmingdale, Long Island factory. Armed with this information, one of LAIT's members, Mark Gaskell got in touch with Accident Reports in the US, hoping to trace the fate of a number of P-47s involved in incidents believed involved with the Burtonwood and Warton US bases. One of the accident reports traced mentioned Pendle Hill by name as the place where one of the incidents occurred - finally solving the mystery of the identity of this aircraft and it's unfortunate pilot.

F/O John R. Runnells was flying the third aircraft in a flight of five P-47s on a ferry flight from East Wretham to Warton, the other pilots being Capt. Charles Francis (Flight leader), Lt Giles, 2nd Lt. Donald L. Mosher, Lt. Johnson. Capt. Francis had been given clearance to lead the flight of P-47s to Warton for modification, although weather conditions were far from ideal, it was his decision to proceed - he was the only member of the group with any experience of British weather conditions and navigation over wartime England. Some ten minutes later at 14.10 the weather Officer received a report that conditions over the destination, Warton, had deteriorated and managed to contact Capt. Francis just before his flight took off to inform him of the change in conditions and advised him not to go. Despite this he insisted on continuing and at 1450 the flight taxied out and took off. Immediately after take off Lt. Giles was unable to find the flight and proceeded alone, the other continued, but on approaching Liverpool they ran into zero visibility and were forced to fly on instrument. At this point 2nd Lt. Mosher lost contact with the flight and subsequently managed to land at Ringway. 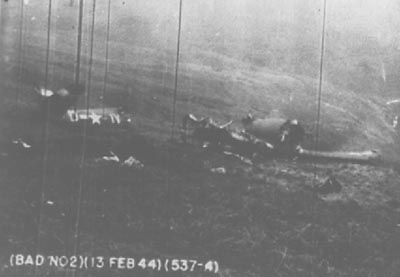 Quite what happened to F/O Runnells from this point is unclear, but it seems probable he also became separated from the flight in the fog and continued on instruments, probably hoping to find a break in the cloud, until his fuel ran out. Examination of the remains of his aircraft at the time found no sign of fire and evidence that the fuel tanks were dry. Also oil covering the engine was not affected by heat, which it would have been if the engine was running and still hot at the time of the crash. Finally no propeller gouges were found along the path made by the aircraft as it struck the ground. Ironically Runnells had managed to clear the summit of Pendle Hill and in fact appeared to be attempting a forced landing on the far side, but came down short and broke up as it hit the rough moorland going down the side of the hill. The wreck was reported as salvaged on the 21st February 1944, though parts remained for many years, including the pilot's back armour, which is believed to have been recovered some years ago and is still held locally.

Sadly the tragedy on this day did not end with the death of F/O Runnells, as Capt. Francis' P-47 42-8621 dived into the ground on approach to the flight's intended destination, BAD2, Warton, at 16.30, and he was also killed. F/O John R. Runnells from Pennsylvania is buried at the Cambridge American cemetery, Cambridge, England, Plot F, Row 3, Grave 100, Capt. Charles Francis lies nearby.

The area around Pendle Hill is notorious for heavy mist and low cloud clinging to the hills and several locals recall that a Spitfire also came down in the area. One informant even claiming to have a wooden propeller blade (not seen) which sheared off as the aircraft made a wheels up forced landing. Some accounts seem to be confusing the details of the loss of Spitfire W3628 which initially was thought to have crashed on or near to Pendle hill and a search of the area was carried out at the time, but others recall the aircraft being largely intact and possibly being recovered and repaired, which seems more likely - Another mystery to solve!

Update: May 2001: The pilot's back armour and a small section of wing-tip recovered from this site in the 1970s have now been located and donated to the LAIT collection.

This page & all articles on this site Copyright © Nick Wotherspoon 2001